FRAMEWORK: As the Swedish Prime Minister has expressed his intent to use the Swedish Armed Forces to regain control of his country, if necessary, Operational Scenario #4(b) of Plan Green shall be in force.

Sweden is not a NATO Treaty member, so Treaty obligations do not apply in this context. Depending on the political situation, the Swedish Government may find it necessary to request assistance from regional neighbors on an individual basis, if NATO ‘deep-state’ bureaucrats attempt to block a relief operation. In such a situation, NATO neighbors Norway and Denmark may provide direct support to Sweden as individual, sovereign states, rather than as part of the NATO Alliance. Finland has close ties with Sweden and may also provide support. As it is a Baltic power, Russia’s assistance might also be sought for security operations, perhaps in the form of a naval patrol.

A Brief Description of Sweden, its Armed Forces, and Law Enforcement:

SWEDEN. Population: 10,000,000; of this, 460,000 are Muslims (officially). Constitutional Monarchy: King Carl XVI Gustaf. Prime Minister: Stefan Löfven. Opposition Nationalist Party: Sweden Democrats. Refugee population from African and Muslim countries, as of 2016, was at least 562,000. Other statistics have their population at 591,000. The refugees are responsible for an unprecedented crime wave. The Swedish government has long suppressed criminal statistics, which demonstrate that nearly 100% of rape crimes are committed by Muslim and African refugees. Active-duty Swedish soldiers: 25,340. Reserves: 29,830. For 2019, 7 active battalions and 14 auxiliary battalions are planned. Police in uniform: 19,144, or 1:192 of population. At present, Sweden’s military has been reduced to such a state that it may be unable to cope with an Islamic insurgency.

Below: Sweden is a Scandinavian country located between Norway, Finland and Denmark.

Although Sweden’s recent defense planning has been based on developing its ability to repel a foreign, that is, a Russian invasion of its territory, the greatest actual threat to Sweden is posed by the significant internal barbarian population, which has been placed in Sweden and aided by political forces and others, who are hostile to the historic Swedish people. Through rape colonization and a very high fertility rate, silently or actively encouraged by previous governments, the Muslim and Third World populations in Sweden threaten to displace and eliminate the historic European population in a matter of generations.

Sweden has some of the most difficult terrain in the world, with high mountains running in a north-south direction, along its border with Norway. The terrain descends in the direction of Finland, the Gulf of Bothnia and the Baltic Sea, and moving south from the southernmost border with Norway. The terrain, whether high or low, has areas of deep forestation. Sweden has a long coastline along the Gulf of Bothnia in the east, the Baltic Sea to the southeast, and the Denmark Strait (Skagerrak, Kattegat waterways) to the southwest.

Swedish Mobilization: Prior to the commitment of international forces for direct and indirect support of Swedish military forces, the government shall ensure that maximum military strength is made available. (Sweden should end the conscription requirement for women. In light of the grave demographic threat the nation faces, loss of any woman of child-bearing years is catastrophic, so the trend toward a reduction of the historic population should not be facilitated and accelerated by combat losses.)

Establish a Line of Containment Malung-Borlänge-Falun-Gävle. No Muslim or other hostile refugee may go north of this line; the same who are north of the line must depart northern and central Sweden and move south of the line, for eventual deportation.

Mobilization of Police Forces, including Auxiliary Police, if they exist. If Auxiliary Police do not exist in Sweden, the national, county, and local authorities shall enact and activate training programs without delay.

Organization of the historic Swedish population as Militia, on a County basis; weapons shall be distributed to the same. If Sweden has an insufficient supply of individual weapons and/or support weapons, an allied nation (or allied nations) may fill this need.

Native Swedes shall be evacuated from localities, where either the Swedish Army or Police do not have the strength to provide security, or where a small community or number of families is so overwhelmed in number by Muslims, that their position is untenable and their defense impractical.

Set up Transit Camps in southern Sweden, in areas removed from major population centers. As Muslims are no longer to be hosted by Sweden, the Camps shall be of a temporary nature.

Secure Strategic Points Around the Country.

Starting with their bases, Swedish regiments and battalions shall establish garrisons to prevent them from being overrun by surge mobs of Muslims and hostile refugees, and prevent infiltration of bases by small Muslim teams or individuals. The Swedish Army shall secure Stockholm, Karlstad, Gothenburg, Malmö and other cities, as well as all airports. Air and naval bases shall be secured by the Air Force and Navy, respectively, who shall prevent loss of personnel and equipment. Army and Air defense personnel, or other personnel, who are not likely to be employed in their authorized conventional missions, may be redeployed to reinforce and provide security for other facilities, or be deployed to reinforce the Police in the cities, towns, and villages of Sweden.

The Swedish Military shall coordinate the deployment of allied formations and shall retain supreme command of their operations on Swedish territory.

Swedish and Allied combat battalions shall deploy to the Line of Containment. 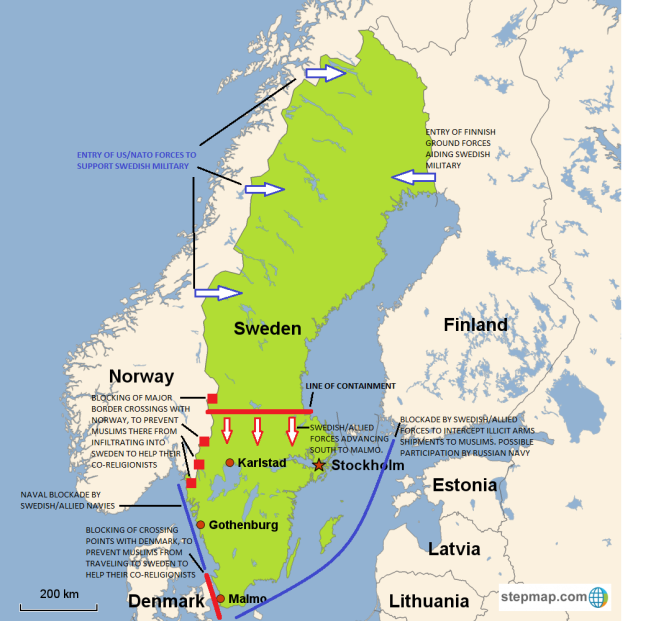 The Swedish Army and Allied forces shall engage in what shall be characterized as clearing operations.

Operation “Sortie Sweden” shall have 5 stages:

1) From the Line of Containment, advance to phase line Karlstad-Stockholm.

5) The final advance converging on Malmö.

Advancing forces shall link up with garrison forces, relieving the cities and communities under Muslim siege.

Swedish citizens and foreigners who have aided, abetted, or supported the hostile refugee populations shall be detained.

As Swedish and Allied forces advance, they shall order all Muslim communities to depart in a southerly direction and direct them toward Transit Camps.

All Muslims/hostile refugees shall be disarmed.

Resistance shall be met with lethal force. Where Muslim resistance is organized or fanatical, overwhelming firepower shall be employed.

Once the final objective city, Malmö, is secured, Swedish/Allied forces shall prepare for post-operation missions.

The Swedish and Allied navies shall patrol the Denmark Strait (Skagerrak, Kattegat waterways), the Baltic Sea, and the Gulf of Bothnia, for the shipment of arms and persons bound for Sweden, which are intended for the support and reinforcement of Muslim insurrection.

As the insurgent Muslim refugee population has no conventional air force, Air Operations in “Sortie Sweden” shall mainly be characterized by reconnaissance of the ground, patrolling for possible flights of Muslim drone aircraft, and providing support to ground and naval forces.

Swedish forces and Police shall provide perimeter security around Transit Camps, general security within the Transit Camps, and personal security for Civil Authorities working to repatriate Camp detainees. Detainees shall be deported, starting with young adults first, followed by children and their parents. The middle-aged and elderly shall be deported last. Those who self-deport shall not be required to wait or follow any sequence.

If politically feasible, Swedish and Allied forces shall set up a land corridor, via which refugees shall return to their points of origin, ideally via the route they entered Europe.

Mr. Cloutier is an author and translator of several books and is the writer for anti-cominternblog.com.