1,300 years ago, following the Moslem conquest of Spain, an Arab force under al Hurr ibn Abd al-Rahman al Thaqafi crossed the Pyrennes Mountains, and captured the city of Narbonne, to use as a base of operations for raids into Aquitaine and Southern France.[1]

It was the year 717. Western Europe was faced with the threat of Moslem conquest. All of Iberia (Spain and Portugal), except the mountainous far north, had been brought under Muslim control in just 6 years. It seemed that France (or Gaul) would suffer the same fate. Muslim expansion was checked at the Battle of Toulouse in 721, when Odo of Aquitaine killed the new Saracen commander, Emir al-Samh. Even so, Muslim control of Septimania (the Mediterranean coast of modern France) remained secure.

Most historians consider the re-conquest of Spain to have begun in 722, when the Visigothic nobleman, Pelagius, defeated a Muslim force at the Battle of Covadonga in 722 and established the Christian kingdom of Asturias.[2] But it would not be until the time of Charlemagne, when measurable progress in the Reconquista would be made again.

In 732 A.D., the Moslem governor of Spain, Abd er-Rahman, decided to seize the rest of France. He led an army of 50,000 men northwards, but was decisively defeated at the Battle of Tours, in October of that year. Still, the Muslims would control southern France until 759,[3] when Frankish King Pepin conquered Narbonne.[4]

Below: Iberian Peninsula circa 756 A.D.

In 778, Charlemagne sent an army against the Muslim Moors in Spain. He eventually won control of the northeastern corner of Iberia, even though his rearguard under Roland met a disastrous end at the Roncesvalles Pass, at the hands of wild mountaineers.[5] Years later (801), he captured the city of Barcelona (capital of modern Catalonia). Charlemagne made the captured territory (portions of Catalonia and Aragon) part of his dominions, under the title of Spanish March.

Below: Empire of Charlemagne circa 814 A.D. 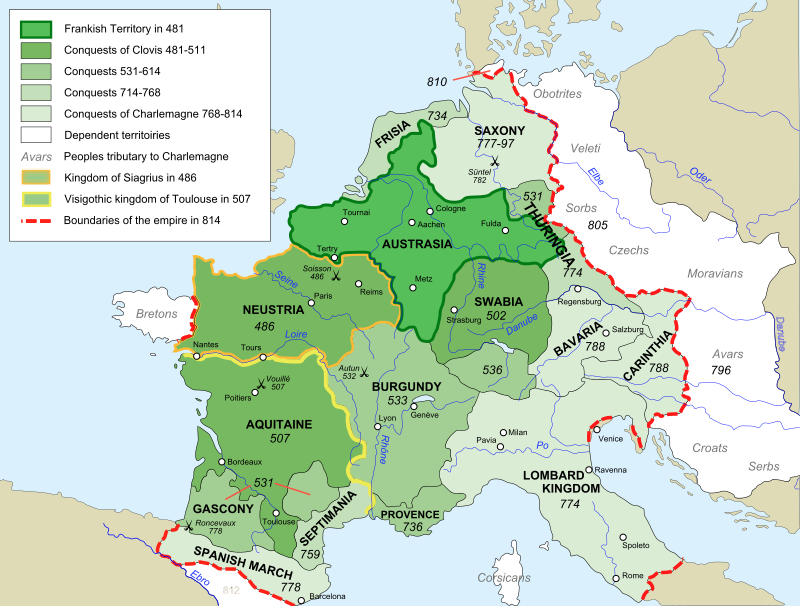 In the 800s, the Kingdom of Asturias expanded southward to the Duero River. In the early 900s, it became known as the Kingdom of León. To the east, Navarre, Castile, Aragon, and Barcelona also expanded at the expense of the Moors, so that by the year 1000, a significant portion of northern Spain had been cleared of Muslim influence. 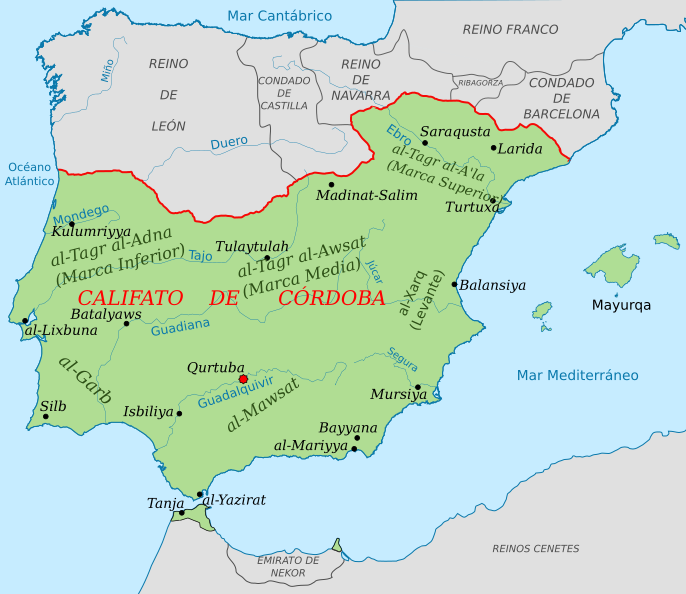 In the first half of the 1100s, the new nation of Portugal added its energy to the Reconquista, as King Alfonso pushed the Muslims to the southern bank of the Tagus River. The other kingdoms of Iberia continued to press them as well, until by 1200, half of the Iberian peninsula had been brought under Christian control. 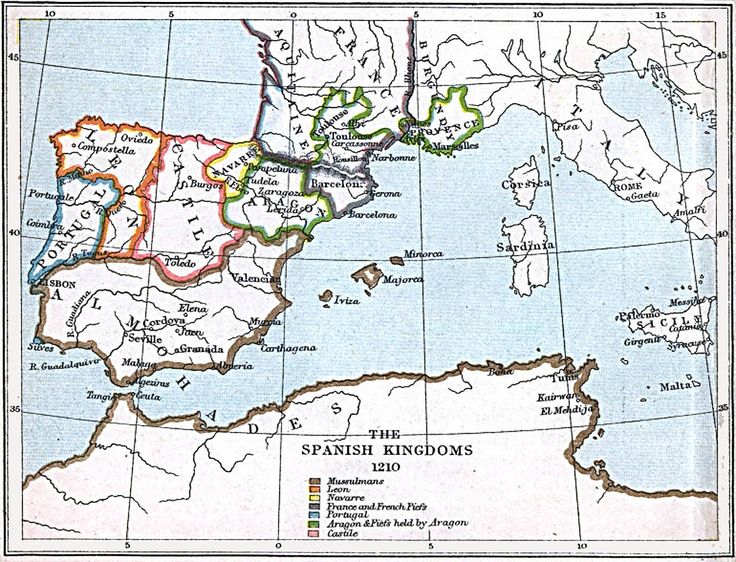 The final push against the Moors began in 1481. Muley Abu’l Hassan, Muslim king of Granada, attacked Marquis Rodrigo Ponce de León, Duke of Cadiz,[6] but King Ferdinand and Queen Isabella of Spain came to his aid. After 10 years of war, the Muslims were expelled from Spain in 1492. 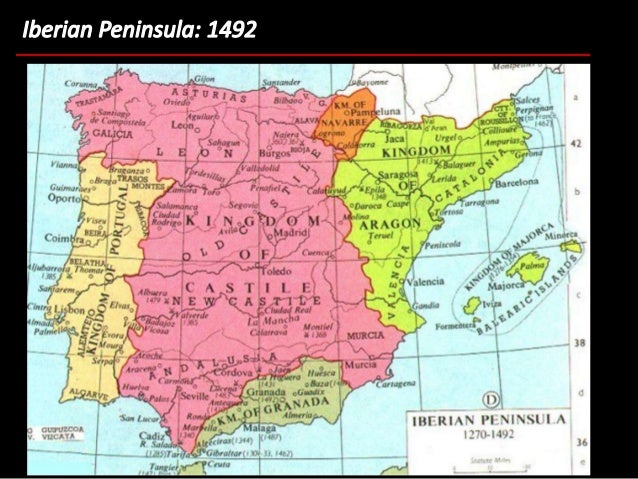 Although Muslim political control in Spain was eliminated, many Muslim peasants of Moorish origin remained. Over several decades, these Muslims had to convert to Catholicism or be expelled.[7] The descendents of those North Africans can still be seen in Spain. Mayte Mateos and María Mendiolas, who formed the 1970s Spanish pop group Baccara, may be representative of the European and North African types found in Spain:

Along with the Muslims, the Jews were also expelled from Spain, due to the establishment of the Inquisition, and the prevailing opinion that they were too willing to do business with Muslims. Indeed, it was widely thought that the Jews had aided the Muslims in their first conquests and occupation of Iberia.[8]

With the above expulsions, the Catholic character of Spain (and Portugal) was consolidated. With a single faith, a union of crowns, and more or less compatible ethnic groups, Spain experienced a meteoric rise in power, particularly with its discovery of the New World, which brought it immense wealth – something it could not have done, if it had still been distracted by conflicts with the Muslims in Iberia.

Now, 1,300 years after the Muslims crossed the Pyrennes Mountains into France, Europe again faces the threat of Muslim domination. And it was brought to this condition, not by an army of jihadists, but by the invitation of half-mad gentiles and Jews,[9] who believe that filling Europe with millions and millions of half-educated, rapacious Muslims and Africans, is a path to a Brave New World.

From 721 to 1492, Europe knew what it had to do, in order to preserve its peoples, faith and civilization: expel the Muslim. It took over 700 years to do so, because the Muslims had formidable armies, and Europeans were not always united in the effort. Today, the nations of the West have the most formidable armies and weapons in human history, and the Muslim invaders have nothing more than an invitation from Angela Merkel and Europe’s sad sacks. Chanting socialist mantras, the leaders of Western European governments even refuse to summon the will to fight. The Muslim, on the other hand, has not hesitated to seize the opportunity offered to him by Europe’s turncoats.

However, the peoples of Europe are awakening to the danger. The question is, can they succeed in bringing nationalist governments to power, that will act with the necessary resolve, before it is too late? With all the power and means at Europe’s disposal, it should take no more than a decade to clean the British Isles and the Continent of Muslims and Africans. Why take 700 years to do so?

Mr. Cloutier is an author and translator of several books, and is the writer for anti-cominternblog.com.

[2] Some historians assert that the battle took place in 718 A.D. https://en.wikipedia.org/wiki/Pelagius_of_Asturias

[4] France derives its name from the Germanic tribe that dominated the region, the Franks.