Election 2016 was marked by unusual violence that was directed against supporters of Republican President-elect Donald Trump. With moral support from even the White House, left-wing extremists, Mexican nationals, and black activists continue to target Trump supporters. Little was done to restrain these mobs and Obama himself took part in fomenting attacks against police officers across the country. The Republican victory on November 7 was followed by a period of uncertainty, as to whether or not the Deep State would openly rebel against the Constitution and prevent the new President-elect from taking office. The swearing-in of Donald J. Trump to the U.S. Presidency did not reduce the civil violence that was fostered by Deep State-sponsored Antifa (Anti-Fascist) groups, even as the prospect of open war between the states receded to the horizon. And now that the furtive plot to overthrow President Trump and the Constitution is being brought to light, the Deep State appears to be tumbling into ruins. But the Deep State still retains strongholds, such as California, from which it can continue to resist or regroup. Therefore, it is worth considering the possible scenarios that might develop, if the Deep State should somehow rebuild its strength.

The only time that a US Presidential election provoked a civil war, was when Republican Abraham Lincoln won the election of 1860. Seven southern states withdrew from the Union in January 1861 and formed the Confederate States of America. Hostilities began in April 1861, when South Carolina bombarded and captured Fort Sumter. When President Lincoln began mobilizing an army to recover the fort, four more southern states seceded and joined the Confederacy.[1] The “War Between the States” lasted four years and ultimately ended in a Northern victory.

Though the North and South disagreed strongly on such questions as tariffs, states rights, and slavery, they agreed on forms of government: the Constitution of the Confederate States of America was identical to the United States Constitution, in nearly every respect. They also had the same national heroes, such as Patrick Henry and George Washington. These shared values and heroes made eventual reconciliation possible, once the war ended in 1865.

A reconciliation today might be more difficult: while Republicans or residents of “Red” states may still revere George Washington and Patrick Henry, Democrats or residents of “Blue” states are more likely to worship Che Guevara, or America’s ‘False Dmitri’,[2] Barack Obama. While a Republican would not hesitate to display an American flag, it was observed that on the first night of the Democratic National Convention in July, not one American flag was to be seen.[3]

Thus, “Red” states and “Blue” states are sharply divided[4] by visions of government: Democrat states tend to lean toward the “dictatorship of the proletariat”, while Republican states tend to lean toward more representative government models. In terms of politics, ideology, and geography, a hypothetical civil war would differ strongly from the previous American experience. For those analyzing the possibility of civil war in the United States, the Spanish Civil War of 1936-1939 may be a relevant case study.

There were two major camps in the Spanish Civil War: the National Front and the Popular Front. Each side corresponded to a bloc that could be expected to form in a second American Civil War. The pillars of Spain’s National Front, that is, the Catholic Church, the Spanish military, landowners, monarchists, and the Falange Movement, correspond to the US Republican Party, the religious right, the US Military, the wealthy, Constitutionalists, patriots, and social conservatives. The Popular Front’s republicans, socialists, communists, Anarchists, and Basques, correspond to the US Democratic Party, liberals, socialists, black militants, LGBT extremists, Antifa, and Mexican separatists.

A look at how states voted in the Electoral College in the past 20 years,[5] suggests where the initial frontlines would lay in a civil war. The states of the Pacific coast, the upper Midwest, and the Northeast have generally voted for Democratic presidential candidates. These might form a bloc that we shall call “Blue States.” The South, the lower Midwest, and Western states have generally voted for Republican candidates, and so we shall call this bloc the “Red States.” An analysis of voting patterns at the county and city level reveals that a Blue-Red split would not strictly fall along state lines. Nevertheless, for a simple prediction model, it is sufficient to work with state lines.

Below: Electoral College Maps from Elections 2000 and 2016, Demonstrate a Pattern of Republican and Democrat Voting That Has Generally Held for 20 Years. 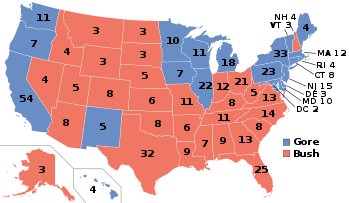 With the geography of the two hypothetical sides established, the next thing to consider is what sides the military services might support. In the last century, military services were split in civil wars, in which socialism was a competing political vision. Thus, in the 1905 and 1917 Russian Revolutions, naval personnel sided with socialists and Bolsheviks. This phenomenon was repeated in Germany in 1918, when the German Navy declared for the socialists and Spartacists, and again in Spain in the 1936-1939 Spanish Civil War, when most of the Spanish Fleet supported the socialist-communist-anarchist Popular Front. Professional soldiers – both active duty and retired – tended to support those who promoted nationalism and traditionalism. While revolutionaries were victorious in the 1917 Bolshevik Revolution, “old guard” army servicemen put down the 1905 Revolution, the Spartacist Revolt, and overthrew the Popular Front government in the Spanish Civil War. Given past experience, one might expect the US Navy to defect to the Blue States (but do not count on it!), which coincidentally possess many seaports. And past experience might cause us to expect the bulk of the US Army, Air Force, and Marines to align with the patriotic Red States – which coincidentally host 7 out of 11 major military installations in the United States,[6] and many smaller installations.[7] Similarly, a presumed Red State bloc would possess 35 US Air Force bases, while a presumed Blue State bloc would possess only 18.[8] In the case of the US Navy, 15 bases are located within a presumed Blue bloc, while 13 are located within a presumed Red bloc.[9] Even though over 200 patriotic, senior officers were purged and replaced during Obama’s tenure,[10] one may still expect very strong support for President Trump among all ranks.

Another factor to consider is gun ownership among the civilian population: over 60 million Americans own at least 300 million guns, and many of these weapons meet military standards. Most gun owners tend to vote for pro-gun, Republican candidates. In the role of militia, they would be a very important factor in determining who controls a given region.

Another factor to consider is energy: the Red States would control majority portions of oil, gas, and coal deposits in the United States. And the Red States would have a large share of food production. One area in which the Blue States may have some advantage is manufacturing.  This advantage would be brief, if Red State forces moved quickly to secure adjacent Blue State industrial regions.

Lastly, one must consider that in addition to being a war of ideologies, this would generally be a war of races, as well. Most Americans prefer not to recognize it, but it is a fact that race-identity strongly motivates significant numbers of people on both sides of the struggle.

In this writer’s opinion, without foreign intervention, a conventional military uprising on the part of the Blue States would probably fail, soon after it began. However, if the Blue States (the Deep States) pursue irregular (asymmetrical) warfare, by using ideologically committed militant forces, they might affect the strategic balance. Antifa, Muslims, black militants and separatists might engage in ethnic cleansing attacks against white civilians, particularly women and children. Through the use of terror tactics, they may force the evacuation of white populations from disputed areas and thus offset conventional military setbacks, by forcing Red States to redeploy regular forces for civil defense. But such actions would almost certainly risk reciprocal – and perhaps far stronger – responses from Red States, particularly if they feel compelled to recover the initiative.

During the 2016 election campaign, some American media openly called for a coup d’etat, if Donald Trump won the election.[11],[12] In the months since the election, rebellious FBI and CIA agents have sought to answer this call, by bringing about a palace coup. In addition, Black Lives Matters threatened to start an uprising[13] and agents of George Soros were everywhere, raising commotions.[14] It has also been reported that anti-Trump forces have been stockpiling weapons for an insurgency or civil war.[15] With light being shed on its Civil War-in-the-Shadows, the Deep State is down, but not out of the game. It may need to replace some of its agents, but no one should think that the Deep State is going away. As long as the paymasters are free to move their pieces around on the board, Americans must remain vigilant to the possibility that the Deep State will regroup, and try again.

[12] There were even calls for assassination: http://www.wnd.com/2016/11/anti-trump-resistance-assassination-threats-rioting-assault/